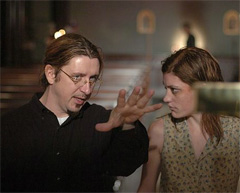 Of course, as always, this is patently untrue. Scott Derrickson, as director, is invested in the sentiment, but unlike the usual rote press-junket hard-sells, he seems inclined to believe it. A self-proclaimed "orthodox Christian" filmmaker (writer of Urban Legends: Final Cut!, director of the occasionally praised Hellraiser: Inferno!) may be an unlikely candidate to make a well-balanced exorcism film, but Derrickson pulled off a surprise in his story of a sanctioned exorcising priest tried for negligent homicide.

Which is not to say by miracle or fluke. Derrickson and co-writer Paul Harris Boardman (his collaborator on Urban Legends and Hellraiser) have done their homework, and Emily Rose is rife with evidence that they understand the basic tenets of the genre. They establish visual and thematic motifs (corridors and clocks, the latter appearing in The Exorcist as well), they build character through audience-shared experience. Importantly, they understand something of the gender roles of possession film: Father Moore's defense lawyer is Erin Bruner, who as a woman is able to identify with Emily's vulnerability, knowing she herself is open to the same possessing influence. (Moore himself is a man of faith and not of science, and this allows him the priestly prerogative: to identify with the woman's open mind rather than that of the man of hard science.) It's a mainstay of possession film, and Derrickson lays it out clearly to the audience with Bruner placed in a faithful repetition of a traumatic flashback of Emily Rose's experience, with Bruner taking the role of Emily. The feminine (if not female) victim-hero central to horror film is downright crucial in possession film. The type of mind used in such film (the woman's mind existing as entity in distinct opposition to male mind, not through inherent characteristic but experience) - the gendering of openness and acceptingness, here mentally gendered thus due to blunt fact of physiognomy, means that Bruner can learn during the trial in a way that calculating prosecutor Ethan Thomas cannot.

Thomas is introduced in exposition as a devout Christian, a man who spends all his time in the church, and a shrewd sonofabitch. "Shrewd" is not a description that helps characters in possession film. Sight may help you, or compassion. Open-mindedness (of the intentional [intellectual curiosity, willingness to regain your faith after losing it previously] and unintentional [beset by supernatural or unexplained powers due to your unacknowledged possession of the open-mindedness characteristic] varieties) may help you. Faith will help you, though its price will always be high: your job, your life, a lifetime's peace of mind. It may bring salvation, or it may only bring understanding (in spirituo-faithic terms, this understanding often takes the form of resigning yourself to uncertainty forever, the only response to glimpsing a new world of non-fact-based realities [and this a bargain compared to the permanent insanity demanded by Lovecraft of his analogues]). Bruner is open-minded; Thomas is shrewd. Bruner can learn and experience; Thomas cannot. Thomas demands facts, facts, facts, medical science, responsibility to man's law as a measurement of higher moral law. It's pretty rare for an antagonistic prosecuting attorney to be noble, and Campbell Scott doesn't get to do too much with it, but Thomas gets just enough to be established as a good (not nice, certainly, but good) person, a choirboy when he is able to be, but no choirboy when the situation demands it. He's more of an Old Testament attorney - not exactly fire and brimstone, but one who is, at times, disappointed with those in his charge, and firm in his judgment of wrongs done and punishments deserved. He cedes authority to judges, but only in deference to structure, and bases his objections not on statutes or conduct, but on right and wrong.

In lesser hands this could have been an anti-right or anti-Christian move, Thomas the sort of Christian feared in Los Angeles: one so preoccupied with the letter of the law (the word of the Bible) that he forgets that his fellow humans are human. Bruner does take this brief shot at Thomas, asking if his creed's credo doesn't involve compassion, but this isn't the point that Derrickson wants to make. Thomas isn't a bad Christian, or a bad man. He's a good Christian, a good man, even a good lawyer, and he's a man of faith, but in exorcism film, his kind of faith is static - just as it will not waver, will not stoop to encompass and excuse that which is below the prescriptions of his faith, neither can it stretch to understand that which is above it.

Thomas is the antagonist, to be sure; The Exorcism of Emily Rose is Erin Bruner's story, in which she is the frame through which we view what would normally be the facts of the case. She is inarguably the access point for the audience, but Derrickson is still interested in balance, and picking a protagonist (not heroine) on one team or another isn't the way to deliver it. If it seems unfair to make one attorney sympathetic and one unsympathetic, Derrickson tries his level best to keep it fair, and every possession-heavy flashback is countered, either by Thomas's rational (and, it should be noted, convincing) explanations or by medical assessment, expert testimony, logical alternative. The flashbacks themselves, while not free from dramatic musical cue, jump cut, sensationalist attitude, do their best to shy away from unexplainable. Every contortion is potentially epileptic, every horror potentially hallucinated. Derrickson carefully avoids stacking the deck, and even if the audience tends to lean toward possession during scary, jumpy moments, Thomas's propensity to snap it back to reality in the post-flashback sterility of the courtroom with a simple, even obvious, explanation instantly casts doubt not only on the validity of what we've just seen, but on Father Moore's more-religious-than-the-audience (that is, perhaps, holier-than-thou) beliefs and the whole notion. If by some chance we bought into the contortions, and now Thomas points out that Emily was epileptic and off her medication, we have to doubt our willingness to believe any of it at all.

It's still a horror film, and Derrickson is aware of how to make one. Is it a horror film about horror film? Not quite, but it does know what it is, and even if it's not self-conscious, it does encompass the idea of horror film in a compelling way. Every back-to-normal feeling when we return to the courtroom is the feeling at the end of a horror film. Every rational, angry deconstruction offered by Thomas reveals that the tap at the window is a tree branch. The best horror, though, isn't forgotten the moment the television goes off, and Emily Rose acknowledges this too. If the story-in-flashback, the unwitnessable (for this is always clear, that these depictions are opinions, accounts, recollections, and never omniscient, and when we begin to forget it, Thomas is there to remind us), is horror film, then Erin Bruner after flashback is the audience after the film ends. One doesn't have to believe to be scared, and Emily Rose makes this one of its main stories. She isn't ever entirely convinced - of anything, it seems - but she is still subject to the parallel momenta of horror-film and of the flashback-story. The exorcism itself is to Bruner as horror film is to us, especially under ideal horror-film conditions: at home, alone in the dark, the film may not have made believers out of us - but an echo, a coincidence, is still scary, even if it may not convince us that Freddy is around. Bruner's reactions are an examination of how people freak ourselves out, how we bypass rational explanation or the eject button and let fright work. This is why horror fans like exorcism film: its victims share our strengths and weaknesses (openness is both), a more fulfilling experience than trying to identify with some dumb kids in Venom.

Emily Rose builds tension well, if not originally, and the skeptic in the audience may scoff, preferring the equal-time sobriety of the courtroom to the jumpy believer quality needed in these scenes, but that's what makes it a horror movie: the removal of the safe filter of the single-viewpoint flashback device. Bruner at home, Bruner in the street, is definitively the film's worldview, and it's uncomfortable to have to consider the possibility that Derrickson is going to set us down firmly in one camp. At first glance, his insistence that one will come away from the movie questioning one's belief makes it seem likely that he will - a quotation like that isn't designed to indicate that believers will become agnostic, regardless of the polite "no matter what you believe." Somewhere along the way he realizes, though, that horror film isn't designed to change belief, its visceral rides too cathartic to effect reconsideration of worldview. That sort of change only comes about through leaving the viewer without concrete answer, and while most viewers - especially seasoned horror viewers - are film-experienced enough to make the necessary interpretations and decisions well before the film is over (or before it starts), not taking home any questions about the existence of the demonic, Derrickson realizes you don't raise legitimate questions by bludgeoning the audience, and winds up on the right path. His movie is a shrewd sonofabitch.